A few weeks ago, people travelled from all across Denmark to attend what may have been the last official worship service at Samuels Kirke (Samuel's Church) in Copenhagen. Along with 16 other church buildings across the country, the handsome brick landmark on Thorsgade was being closed and put up for private sale -- a first in Danish history. 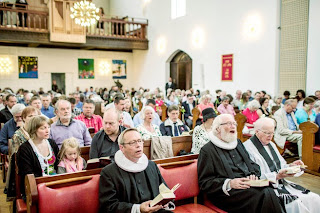 Actually, churches in the poorest of condition have been torn down before, says Hans Raun Iversen, a lecturer in theology at Københavns Universitet. But “now we can say that the folkekirke is going on the open market. This is something new.”

Deadline for bidding on the Copenhagen landmark was June 21, and a winning bidder has still not been announced by the Kirkefondet (Church Foundation), the building’s owners. The deal is being handled by Colliers International, a private real estate firm. But church officials have promised the building may not necessarily go to the highest bidder -- only to the one they feel is the best match. In other words, other churches or cultural groups were welcome to bid, and the government might not object to the building becoming a museum, perhaps. But we’ll probably not see any grocery stores or discos in the lovely whitewashed Samuels Kirke sanctuary, with its traditional sailing ship hanging from the ceiling and an imposing statue of Jesus in the entry. 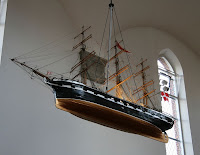 “It’s not about getting the highest price,” explains the foundation’s former general secretary, Morten Skrubbeltrang. “Even though the buildings are well-sited.”

Then what is it about? Manu Sareen, the government’s Minister for Equality and Church, expresses another view of the closures. “It’s important to remind ourselves that closing a church is actually a strengthening of the church,” he told interchurch.dk. “We must make sure that we use our resources wisely. A closed church can perhaps re-open as a parish center or a day-care center, or it can be taken over by other church denominations.”

We’ll have to wait to see what happens. Will the Samuels Kirke building ever be filled with worshippers again? Or will it become a quiet repository of antiques and stained glass windows, a reminder that the people who built a gathering place for praise… are long gone?

Join us in praying that Samuels Kirke and the other buildings will find new life as houses of worship, and that they’ll be once more filled with songs of praise to Jesus. 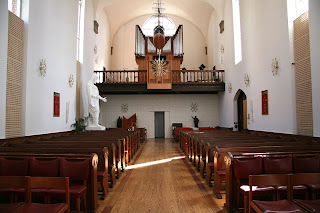 PRAY for wisdom for the members of Denmark’s Kirkefondet, that they would favor offers from Bible-believing churches as they sell off the buildings.

PRAY for funding, that God would open doors for the fellowships He wants in those buildings.

PRAY for unity, boldness, and a renewed focus on outreach among believers. Despite what sounds like bad news, this could be an unanticipated avenue for building up God’s church in Denmark.
Posted by PrayforDenmark No comments:
Email ThisBlogThis!Share to TwitterShare to FacebookShare to Pinterest

Songs From the Living Room