Out of reach? Not at all.

His entire early life was defined by rejection, chaos, and violence.  As Martin Bentsen explained, he was blamed for his mother’s suicide attempts, expelled from the third grade, institutionalized, and jailed. Fueled by anger and rage, his life had clearly dead-ended behind bars. Few could sink lower than Martin. 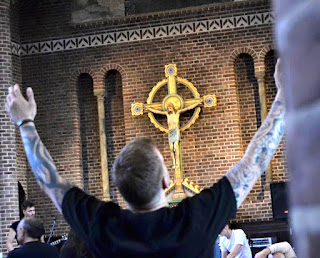 “I was beyond reach and would end up spending my life in prison,” he said. “That’s what the psychologist said.”

And he might have—until he started reading a book whose author set him on a course so radical no one could believe it was really him.

“Even the doctor said, the psychologist inside the prison said, ‘How can you transform so much in such a short time? It’s impossible.’ And I said, ‘I don’t know that either. You’ll have to ask God, because he’s the one who did it.’ ”

Apparently the psychologist, the social workers, and the jailers didn’t know about the power of Jesus Christ to transform—or what might happen when he read the Bible. “This miracle happened in my life,” he explained. “God’s Word is alive. I had been transformed from the inside.”

This is the power of the gospel of Jesus Christ to save and redeem, even for those who seem so far beyond the reach of hope and redemption. You may have to watch his incredible video testimonial more than once to let the truth and power sink in. The story may remind you of another dramatic turnaround. (Read Acts 9 about Paul’s experience.)

Today Martin is thanking God for inner peace and purpose, and much more. Not to give the story away, but today, he is eager to share his story with anyone in Denmark who will listen. He talks about the power of Christ to turn even the darkest stories to light, the deepest failures into victory. He’s not only out of prison, but married and serving as a pastor and speaker.

Let’s pray for Martin Bentsen and his powerful testimony! Watch it here.

PRAY that God will touch many hearts with life-changing good news through Martin’s story.

PRAY for protection and blessing for Martin and his family. Not everyone will appreciate his message, of course.

PRAY for those who will hear his story, that they will be open to knowing Christ, as well. Pray for spiritual breakthroughs.

PRAY for revival in Martin’s church and throughout Denmark as a result of this wonderful testimony.