Summer Camps: Only the First Step

As they have for years, thousands of Danish Christians met last month to renew relationships and experience God in a fresh way at the annual event called “SommerOase.” Their gathering of tents and trailers transformed a large open field on the outskirts of Odder (east-central Jylland) into one of Denmark’s largest annual Christian gatherings. 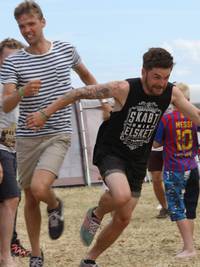 It’s certainly not the only Christian summer family camp in the country. From Lutherans to Baptists to Pentecostals, Danish Christians take full advantage of long July days and anticipated warmer weather to schedule summer retreats, youth events, and family gatherings. But SommerOase may be the largest of its kind. Karsten Bach, general secretary of the DanskOase renewal movement, reported that this year the sun shone on their event in more than one way.

“We’ve been blessed both with good weather,” he said at the end of the event, “and the certain warmth of God’s presence. We’ve experienced a SommerOase where God has touched people through preaching, songs of praise, and prayer. Several have accepted Jesus for the first time, and many people have renewed their faith.”

This is Bach’s second summer event as the renewal movement’s general secretary; he began with DanskOase in May of 2012. He’s publicly expressed a dream of reaching out to even more Danes, bringing them into what he calls “the joy of being a part of a living Christian fellowship.”


“It’s here we meet to experience our unity in the family,” explained Bach. “At the same time, we want to be open and welcoming. So for example on our free visit day, we welcomed 40 people from a summer school for refugees in Aarhus.”


Jens Kristian Sørensen, a SommerOase camper and local teacher, said that for him, “SommerOase is a chance for renewal and challenge in my faith. It’s time to relax and spend time with friends, but also time to grow in my faith in God.”


And be sure to take a moment to view the SommerOase video here. It showcases some of the families, young people, and worship times. It’s encouraging to watch, even if you don’t understand the brief testimonies. And…


PRAY for lasting results in families and churches as Danes return from the refreshment of a summer event. PRAY that SommerOase and other summer gatherings would mark new beginnings in revival throughout the rest of the year.


PRAY for the young people who trusted Christ for the first time, that they would find continuing opportunities to grow in their new faith. PRAY that they would grow, despite opposition from family or friends, and despite temptations or distractions around them.


PRAY also for others who made renewed commitments, that God would show them practical steps to growing spiritually in their everyday lives.


THANK GOD for SommerOase, and continue to lift up its leadership -- including Karsten Bach -- in prayer.
Posted by PrayforDenmark
Email ThisBlogThis!Share to TwitterShare to FacebookShare to Pinterest

Dear Believer,
I hope and pray that the holy spirit will move among you to bring healing through Jesus Christ.Please Encourage brothers and sisters to practice arrow prayer Just like Nehemiah.Through his prayer life he got a vision. This vision brought dignity to his people.