The little church that would not die

Rumors of this church’s demise may have been exaggerated -- though not by much. Only five years ago, many people thought this small church in Brønderslev (northern Denmark) would soon close its doors.

And who could blame them? The fellowship had been meeting since 1942, and had once included over 70 worshippers, with a thriving youth program. Now they were down to just 10 discouraged faithful.  But then they rediscovered the church’s theme verse, which had largely been forgotten.

The verse? Job 8:7 -- “And though your beginning was small, your latter days will be very great.” 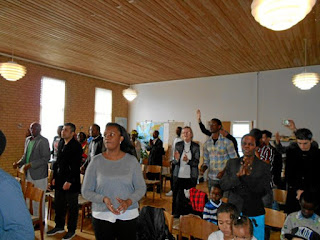 Since then, God has proven the truth of His word in many other ways through this little church, though not perhaps in ways they could have expected.  As more people were drawn to the Bible-preaching fellowship, they began to meet twice, then three times a month.  Today between 50 and 70 worship every week. But the congregation looks and sounds very different than before.

“Today there’s an entirely different kind of life,” explains Morten Jensen, one of the church’s leaders. “The fellowship consists of many nationalities, including from Uganda, the Congo, Kenya, Iran, Iraq, Afghanistan, Kurdistan, and many more.”

Danish or English-language preaching is translated into Swahili, Persian, Kurdish, or whatever other language is needed. Praise and worship takes place with a new, wonderful blend of cultures and personalities.

So yes, rumors of this church’s death were premature. Who would have thought?

PRAY the God would bring many people of many backgrounds to salvation through this Brønderslev fellowship -- and other Danish churches.

PRAY that Christ-centered renewal would take place in smaller churches like this, and across every city of Denmark.

PRAY that this little country would be known for its God-honoring, truth-seeking, blended (and growing!) churches.
Posted by PrayforDenmark
Email ThisBlogThis!Share to TwitterShare to FacebookShare to Pinterest

Praise the Lord! I am really happy to see it. Please continue to post news from Denmark, that encourages me to keep my missionary call to that nation. Thank you.

Praise the Lord! I am really happy to see it. Please continue to post news from Denmark, that encourages me to keep my missionary call to that nation. Thank you.

My Danish grandmother came from the Brondeslev area; (Anna Marie Bang), back around the late 1800s and married my Danish grandpa, Jens Jensen. See prior post.