At first, this Danish pastor tended to confront head-on the growing number of New Age adherents and seekers in his country. In the 1970s and ‘80s, said Ole Skjerbæk Madsen, he approached the task as “apologetical heresy-hunting.” 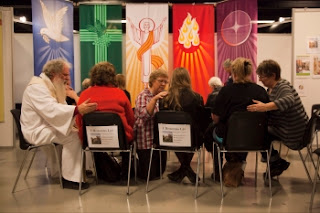 He didn’t have much success, despite his obvious heart for the lost. In most cases, he was met by suspicion, mistrust, and closed doors. And his frustration grew, until he began to change his approach.

“What I’ve learned over the years is the need to move from a more defensive or even hostile attitude towards New Agers and new spiritual seekers, to dialogue and, most of all, presence in their milieu.”

In other words, he meets them on their terms and on their turf. He’s learned to speak their language as he presents the truth of the gospel, with uncommon compassion. And this month his ministry, “I Mesterens Lys” (“In the Master’s Light”), celebrates its twentieth anniversary of outreach and bridgebuilding.

Pastor Madsen and his co-workers are regulars at New Age fairs, engaging and praying for seekers. They also offer accessible YouTube videos and other social media touchpoints.

It’s a bold, unconventional approach -- and potentially a tricky one, since they must strike a delicate balance between holding to the truth and accommodation. They are easily misunderstood by other believers. But the fruit is obvious, as many who were lost in the New Age have come to know the one-and-only Master, Jesus Christ.  As the apostle Paul wrote, “to the weak I became weak, to win the weak. I have become all things to all people so that by all possible means I might save some.”

Watch his story here (Ole’s portion starts at 18:07), or learn more at his English-language website, inthemasterslight.net.

PRAY for Ole Skjerbæk Madsen, for protection and wisdom as he reaches out to New Agers.

PRAY for the IML ministry, that it might remain true to the Gospel, and that the Holy Spirit might use it to bring many more to salvation.

PRAY for the IML movement as it spreads to Norway and Great Britain, that doors would open and more would come to know Jesus.

PRAY that God would use IML to help bring revival to Denmark and unity with other believers.
Posted by PrayforDenmark
Email ThisBlogThis!Share to TwitterShare to FacebookShare to Pinterest